What is Hadith? The Collection, Importance and Authentication of Hadith

In this article we will learn What is Hadith? And also we will learn about Collection, Importance and Authentication of Hadith. Insha Allah

Therefore, the Hadiths were collected and compiled only after being authenticated in order to make sure that the hadiths are genuine. Today the most well-known, most reliable and genuine hadith is the Sahih Bukhari.

What is the importance of Hadith in Islam?

For instance, when he went for Al- Isra, the Ascension to heaven, he brought back to mankind the five mandatory prayers. The verses were revealed about the daily prayers and Muhammad (PBUH) was the only one who explained to the people of Mecca how to perform the prayers steps by steps. In other words, if the hadith was not there, the Quran would have been meaningless to the Muslim’s Ummah.

Another example would be whereby, Allah has revealed to Prophet Muhammad (PBUH) about the five pillars of Islam. In the Holy Quran, the verses were merely commands from Allah to mankind. The hadith explains clearly what Zakat – Charity, is for example, Sawm – Fasting and Hajj – Pilgrimage. In fact the Hadith explains how to offer fasting in the month of Ramadan such what is allowed and prohibited during the state fasting. Furthermore, the hadith also explains about the payment of Zakat explicitly and the rate that needs to be paid towards the needy. Moreover, the rites of pilgrimage is outlined and clearly explained in the Hadith.

Therefore, the hadith itself is a key element to all the Muslims across the world as it is the only guide left after the demise of the Holy Prophet (PBUH) to mankind. In short, the hadith compliments the Holy Quran as it is the best interpretations of Allah’s words addressed to mankind through the Holy Prophet Muhammad (PBUH).
All Muslims across the world follow the teachings and sayings of the Holy prophet Muhammad (PBUH) through the Hadith.

How and were the Hadith collected, compiled and authenticated?

Therefore, they decided to start collecting all the teachings of the Holy Prophet (PBUH) for compilation. It took years and decades to accomplish this noble task.

Nevertheless, the narrators of the Hadiths were very cautious about the authenticity of the Hadiths and therefore before accepting any Hadiths for any transmitters, their characters were investigated in terms of their reliability and integrity. If there were any doubts at any time, the hadiths were rejected. Only strong hadiths were accepted which were known ‘Saheeh’ – genuine. For examples, the Hadith of Imam Bukhari and Imam Tirmizi.

Hadiths are key to the teachings of Islam

According to the Holy Quran, the teachings and sayings of the Holy Prophet Muhammad (PBUH) are limitless; however some of the quotes will be shared below:

The sayings and teachings of the Holy Prophet (PBUH) known as Hadith is the second reliable source for all the Muslims to follow and practise Islam. It is the only guide left and the best gift from the Prophet Muhammad (PBUH) given to mankind in order to have an Islamic lifestyle and to adhere to the commands of Allah as prescribed in the Holy Quran.

In short, the Holy Quran is meaningless to mankind without the teachings and sayings know as hadiths of the Holy Prophet Muhammad (PBUH).

The Birth of Islam and Its Origin 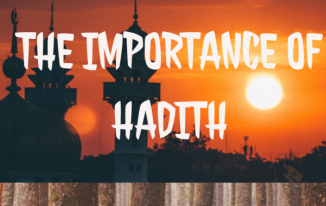