The Wives of the Holy Prophet Muhammad – Brief History 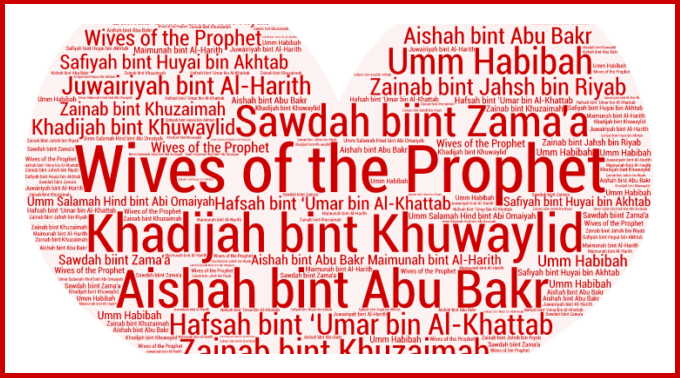 The women who married Muhammad – PBUH were indeed ladies with exceptional characters and who contributed a lot in the life of the Prophet Muhammad – PBUH. They were also great Muslims and exemplars. The prophet had 11 wives. He only married after Lady Khadijah passed away after several years.

The wives of the Holy Prophet Muhammad – PBUH were as follows:

Khadijah was also the first lady who accepted Islam and believed in Muhamad – PBUH revelation. She supported him throughout the three years of persecutions in Mecca. She saw Muhammad- PBUH spending her wealth in the name of Islam. She was also very patient and caring towards Muhammad – PBUH and suffered together with him. Their marriage lasted for 27 years. It was an exemplar marriage where there was love and respect. Muhammad – PBUH was very happy with Khadijah and when she passed away, Muhammad – PBUH was deeply affected.

After the demise of Lady Khadijah, Muhammad- PBUH was very sad and Khadijah left him with four beautiful daughters. There was no one to look after the daughters and the house. Muhammad – PBUH was 53 years old at that time. Then one day, a relative called Khawla approached Muhammad – PBUH and suggested to him that he should consider remarrying.

Muhammad – PBUH was conscious that his house and his children needed a mother, however, he had never considered of re- marriage until Khawla suggested him to marry Aisha, the daughter of Abu Bakr Siddiq. At that time, Aisha was only seven years old of age and as she was young herself, she was not able to look after the children. Therefore Khawla suggested that Sawdah married Muhammad – PBUH in order to take care of Muhammad, the children and his household.

After some years, after the Hijrah, Aisha became officially the bride of Muhammad – PBUH at the request of Abu Bakr Siddiq.

As Umm Habiba was a sincere Muslim, she could no longer stay with an unbeliever and she divorced her husband for the sake of Islam. Umm Habiba took her daughter away and secluded herself. She was forgotten by all the men at that time.

Almighty Allah however did not forget her and her sacrifice. One day a slave came to her and informed her that the King wanted to see her and there was a message for her. When she went to see the king, she was told that Muhammad – PBUH had asked for her hand and wanted to marry her. Umm Habiba was very honoured and happy and Muhammad – PBUH also sent 400 dinars as dowry for her.  Six years later, after the Hijrah took place, Umm Habiba went to Medina to join Muhammad – PBUH and she received a great welcome.

Hafsa was the daughter of Umar ibn Al- Khattab. Hafsa was also previously married.  Hafsa became a widow at a very young age. Her father was worried and decided to look for a husband for her. In the beginning, Umar thought of Abu Bakr and Uthmaan, but they both excused themselves.

Umme Salamah was the widow of Abu Salamah who died in the holy battle of Uhud. She was left on her own with many children and with no money and resources as well. Abu Bakr and Umar offered to marry her but she refused.

Muhammad – PBUH knew about her situation and he therefore sent a proposal of marriage to Umme Salamah. Once again Umme Salamah refused saying that she is old and that she was of a jealous nature as well as having many children.

Zaynab was the little cousin of Muhammad – PBUH. She was from the noble family of the Qurayshi and her father was Jahsh. Zaynab grew up in front of Muhammad – PBUH and he wanted Zaynab to marry his adopted son Zayd.

Zaynab was known for her talent with her hands. She was good at making clothes and gave them out to the poor and needy. The prophet Muhammad – PBUH used to say that Zaynab was the most generous and charitable amongst all his wives. She was given the title as the ‘mother of the poor’ by Muhammad – PBUH.

Safiyya was the daughter of a Jew who was known as Huyayy Ibn Akhtab, the chief of the tribe of Banu Nadir who was also the other cousin of Muhammad – PBUH.  Huyayy was also the enemy of Islam and the Messenger and he fought the Muslims in the Battle of Trench and he eventually died.

When he was nearly sixty, Muhammad – PBUH was informed that Maria was expecting a child and she eventually gave birth to a baby boy. Muhammad – PBUH was very happy and he gave the child the name of Ibrahim. After giving birth to Ibrahim, Maria was given the title of ‘Mother of Believers’. Unfortunately, Ibrahim did not live long. The child fell ill and passed away.

Juwairriyah was a captive and prisoner after a holy war known as Banu Mustalaq.She came to Muhammad – PBUH and asked for her freedom. Muhammad – PBUH bought her and set her free and eventually married her. Juwairriyah accepted Islam.

Maymoonah was another woman who the Prophet – PBUH married too. Muhammad – PBUH married her after accomplishing pilgrimage and after exiting his Ihram.

Muhammad – PBUH marriages have a clear rationale. He married several women to save them from distress, financial difficulties and to support them after losing their husbands and fathers in holy wars. Muhammad – PBUH made sure he treated them all fairly and protected them. They all earned the title of ‘Mothers of the Believers’.

The Life Of The Holy Prophet Muhammad PBUH – Part 5