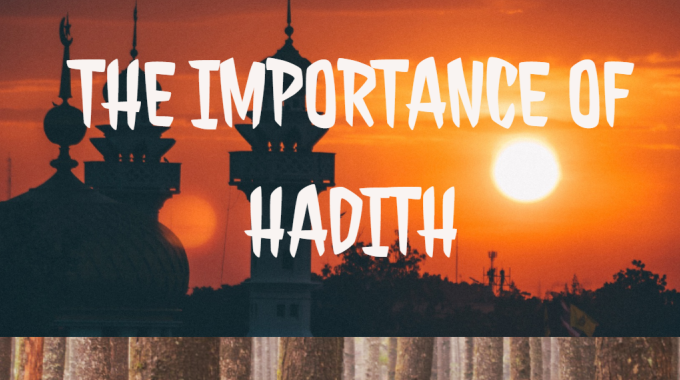 The science of Hadith is a distinct discipline for the paramount importance of HADITH subject- matter, vastness of its scope and the application of methods of research and analysis. Since the Hadith means the world or action of the Holy Prophet Muhammad (Peace be upon him) it had to be reported in undisputed authenticity and in undoubted veracity. This requirement necessitated rigorous research and evaluation of the Hadith and the narrators, and in turn led to the study of history, biography, philology and lexicography. The companions of the prophet appreciated the value of the compilation of the Sayings of the Prophet and some of them made their private collections but in profound discretion and utmost caution they preferred not to publish their compilations.

It would clearly show that the compilation of Hadith was not an innovation of the later scholars. “Hasan al- Basari” and “Shihab al Zuhri“, the renowned “Tabi’een“, excelled in the science of Hadith. However the science of Hadith developed to its full stature during the third century of the Hijra which witnessed the monumental works of “Imam Bukhari” and “Imam Muslim“.

The six great compilations of Hadith called the “Sihah Sitta” represent the great corpus of Hadith. “Abu Abdullah Muhammad Bin Ismail al – Bukhari” (d. 256A.H) is considered to be the most eminent master of Tradition who is his quest for Hadith spent sixteen years in research and traveled extensively in Persia, Iraq, Syria, Arabia, and Egypt. He examined 600,000 traditions and finally selected 7,275 traditions to be Sahih or genuine. He arranged the traditions according to various subjects such as prayers, fasting, pilgrimage and Jihad. Bukhari’s book is equaled in excellence by the compilation of “Muslim bin al- Hajjaj al Qushairi” well known as “Imam Muslim (d. 261 A.H)“.

There is not much  substantial difference in both of these compilations except in the chain of narrators called the asnad, and for the high degree of authenticity each one of these books is called Sahih ( which for want of proper English equivalent could be styled as genuine), and together these are celebrated as two Sahih books.

It would be lightly erroneous to consider that the science of Hadith was confined to only these six books for the al- Muatta of Malik bin Anas al- Ashabi (d.179 A.H) and  the Musnad of Ahmad bin Hanbal (d.241 A.H) rank among  the first rate collections of Hadith. Apart from the authentic compilations of Hadith, hundreds of books were written on the related disciplines of biography, history, genealogy, philology, and lexicography. Moreover, the interpretation of Hadith in relation to the current problems found expression in the numerous works of jurisprudence.

Hadith has been studied from various angles ranging from devotional to the analytical. The collections called the Arba’een fall in the devotional category as their compilers drew their inspiration from a Hadith that, the Messenger of Allah, may be peace and blessings of Allah the Exalted be upon him, said, ‘whosoever preserves for my Ummat forty Ahadith concerning matters of religion, he would be raised among the scholars and jurists on the Day of Judgement”. ( Kashaf –al- Zanun, vol. I, p.52, Istanbul, 1360 A.H/ 1941 A.D). Haji  Khalifa  Chalbi the writer of encyclopaedia Kashf –al- Zanun has cited one hundred different collections of Hadith under the title Arba’een. However of all these collections the Arba’een by Imaam Navawi is the most widely known for its vert comprehensive selection of Hadith which in fact presents an epitome of Islamic teachings.

Since there is no counterpart of Hadith in Christian theology, there are naturally no English terms to convey the precise connotation of the terms employed in the science of Hadith. It would have been unfair and incorrect to invest the terms pf Christian theological reference with specific meanings of Hadith terminology. However, it is important that the English reader should understand significance of the phrases and terms of Hadith, so an effort has been made in the following lines to give explanations of some of the important terms.

Every Hadith or Tradition is narrated to a given pattern. It is divided into two distinct parts, the first portion states the chain of authorities called the Asnad, and is followed by the second portion embodying the verbatim text or matan of the Sayings of the Holy Prophet. The scholars of Hadith subjected the chain of authorities to rigorous examination, classified them, and accordingly arranged the different Ahadith in a descending degree of veracity from the perfect and genuine to the weak and doubtful.

Al- Sahih is a kind of Hadith which is based on an unbroken chain of authorities who were well known for their high sense of Adalat and Dabat.

The Hadith should not be rare and defective in text.

Al- Hassan denotes a Hadith whose chain of authorities though well –known did not possess the same high degree of “Adalat and Dabat so essential for an Al- Sahih Hadith.

Mutasil signifies a Hadith in which the last person in the chain of authorities happened to be a Companion of the Holy Prophet, or a Tabiee ( a muslim who had seen or met a Companion of the Holy Prophet). The chain of authority should be unbroken though all the narrators in it necessarily might not be trustworthy, and in case all the authorities happen to be of doubtful reliability even then the Hadith would be considered as Muttasil.

What is Al- Musnad?

Al- Musnad is that Hadith which through a direct chain of authorities can be traced back to the Holy Prophet personally, and the narrators do not stop with Companion of the Prophet or a Tabiee.

Al- Marfu’ is that Hadith which terminates with the Holy Prophet, it might not be Muttasil.

Al- Da’eef is a Hadith which is defective on account of the poor credibility or missing links in the chain of its authorities, or is so unusual in nature as to lack confirmation from other sources.

What is Al- Maudu?

Al – Maudu is that saying which has been falsely attributes to the Holy Prophet and is known to be a fabrication.

Features and Characteristics of narrators of Hadith

Dabat: He should have been so proficient in Arabic language as to comprehend fully, to remember and narrate the Hadith without the slightest difficulty. He should have made regular study of Hadith with Shaikh and after proper education and training obtained his permission to narrate Hadith. The narrator should be neither senile nor such a tender age as to be infantile. At the time of narration of Hadith he should have possessed all the qualities of discretion and wisdom.

This Hadith was related on the authority of Commander of the Faithful, Abu Hafs Umar Ibn al Khattab ( May the almighty Allah be pleased with him). He said I heard the Messenger of Allah, on whom be the peace and blessings of Allah, say:

It was related by the two leaders of the scholars of Hadith, Abu Abdullah Muhammad Ibn Ismail ibn Ibrahim inb al Mughira ibn Bardazbah al Bukahari, and Abu al Hussain Muslim ibn al  – Hajjaj ibn Muslim al- Qushairi an- Naisaburi; and it is in their two “ sound Books” which are the most authentic of all the other compilations ( of Hadith).

Thought comes first and action follows. Hence intention determines the nature of action. Pure intentions alone can produce pure action. Men may be deceived by outward piety or by apparent goodness of our actions, but Allah Who Knows the secrets of our heart cannot be taken in by such pretence. So every action performed for the sake of Allah, must be pure in its motivation, and should be an unalloyed act of dedication. Our actions for the name of God are a form of prayer and adoration, and as such must be fervent, sincere and humble. Allah accepts our intentions, as it is said in the holy Quran,

“ Not their flesh, nor their blood, reached Allah, but to Him is acceptable observance of duty on your part” (224:37). This verse pertaining to the making of sacrifices is relevant to the whole range of human activity. Purity of intention is emphasized in another Hadith. “Allah looks not on your faces and your wealth, but He looks into your hearts and the (the nature of) your deeds” ( Muslim). What is Hadith? The Collection, Importance and Authentication of Hadith