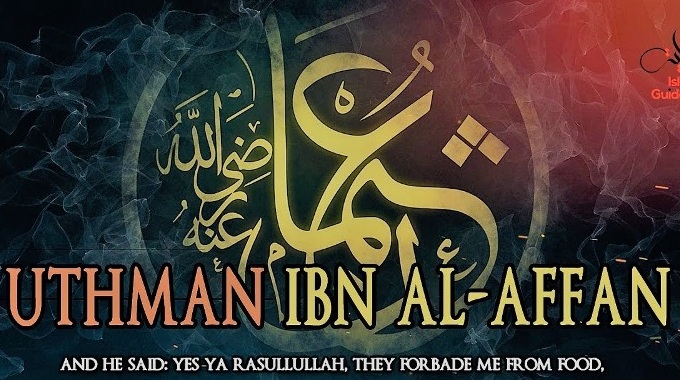 The life of Uthman Bin Affan

Uthman was nominated by Umar as the third caliph of Islam and as his successor after his assassination. He was well reputed as the leader of the Muslims and he reined for nearly 12 years.  The caliphate of Uthman had two phases. During the first six years his caliphate was peaceful, however the last years of his ruling were dominated by conflict, and there were of rebellions taking place.

aban bin uthman bin affan is portrayed as a pious, gentle, and kind man, and he was famously known for his modesty and shyness, and admired for his generosity.  He reignedfairly in accordance on his obedience and submission to Allah and his love for Prophet Muhammad (peace and blessings be upon him) and the Muslim Umma.

Uthman was born seven years after Prophet Muhammad PBUH and he belonged to the Umayyad clan of the Quraysh tribe.  At that time, theUmayyad tribe was the most influential clan of the Quraysh and they are also well known for being the strongest and wealthiest, and Uthman was their “golden child”, the most beloved, due to his good manners and shyness.

Similarly to Umar ibn Al Khattab, Uthman was able to read and write.  This was an unusual skill in the Jahiliyah period and Uthman also became a successful trader.  Throughout his life he was known as a kind, generous man and even before his conversion to Islam he would generously give money to the needy people.

Abu Bakr, who was one of the closest friends of Uthman, invited Uthman to Islam and he embraced the new religion at the age of thirty-four.  This was during the very early days of Islam when the Meccans were persecuting the Muslims.

Despite the persecution, Uthman did not give up Islam and Uthman was married to Prophet Muhammad’s daughter, Ruqayyah, thus strengthening his relationship to the Prophet (peace and blessings be upon him).

The tortures and persecutions continued and Uthman’s wealthy family and status in society as a merchant did not protect him.  He was abused and tortured even by members of his own family. Due the persecutions byhis close family, Uthman and his wife had to leave Mecca and migrated to Abyssinia.

Uthman established a very close relationship with Prophet Muhammad (peace and blessings be upon him), and he acquired deep knowledge about the religion of Islam.

Uthman also became the best mentor for those trying to learn the rituals of worship.  He understood and was able to instruct others in the rituals of ablution, prayer, and other Islamic obligations. Uthman also took part in the migration to Medina and there he assisted Prophet Muhammad (peace and blessings be upon him)in establishing the Muslim nation.  Prophet Muhammad (peace and blessings be upon him) even referred to him as his assistant.

In Medina, water was scarce and control of the wells was tightly held by several men.  Because he was a skilful trader and negotiator, Uthman (may Allah be pleased with him) set about trying to procure a well for the use of the Muslims.  He negotiated a price for half a well; he would have control one day and the other owner the next day.

However, Uthman gave his water to the Muslims freely, so nobody wanted to pay for the water on the alternate days.  The initial owner of the well had no choice but to sell his half of the well to whom nevertheless paid a fair price for it.  Uthman continued to allow the water to be used freely by all the people and never reminded the people of his charity.  He was humble and modest.

Uthman donated generously from his wealth to please Allah and His messenger Muhammad.  Historical Islamic stories mention that every Friday Uthman would buy slaves with the aim of setting them free and that even though he was wealthy he was often without servants because of this habit. .

The portrait of Uthman is that of a generous, unassuming, and kind man.  He was well reputed for his humbleness, modesty, and piety.  Uthman often spent the nights in prayer and he was known to fast often, sometimes on alternative days.  In spite of his wealth, he lived simply and would often sleep, wrapped in a blanket, on the sand of the mosque.

Uthman ibn Affan was appointed Caliph through a process of consultation and careful deliberation.

Uthman was nearly 70 when he became leader of the Muslims and for many years, he had stayed away from the pleasures of this life in order to seek nearness to Allah.  After setting a tone of piety and concern for Muslims that would be the hallmark of his reign, Uthman turned his attention to giving direction to the governors and the Muslim armies.

To the governors Uthman expressed his desire for them to serve the people, and never to exploit them.  He sent well known companions of Prophet Muhammad (peace and blessings be upon him), as his personal deputies to the provinces to scrutinize the conduct of officials and the condition of the people.

Uthman reminded the armies to follow the clear guidelines set down by Umar ibn Al Khattab and asked them never to forget that they were defending the believers.  Massive conquests were made during the reign of Uthman, including parts of Spain, Morocco, and Afghanistan.  Uthman was also the first Caliph to organise a navy.  He reorganised the administrative divisions of the Muslim Caliphate, expanded, and initiated many public projects. Uthman’s most astounding contribution to the Muslims was his compilation of the Quran.

After the death of Prophet and during the time of the Caliphs, hundreds of thousands of non-Arabs converted to Islam.  Consequently, the Quran began to be recited and written in various different dialects and scripts.  One of Prophet Mohammad’s companions, and Uthman’s friend Hudhaifah, whilst on a journey noticed that there were many different recitations of Quran throughout the Muslim Empire.  Hudhaifah suggested to Uthman that there be an official version   written in the style used in Medina.

Uthman knew the Quran by heart and had thorough knowledge of the context and circumstances relating to each verse.  The Quran had been gathered during the time of Abu Bakr and was in the safekeeping of Prophet Muhammad’s wife Hafsah.

Uthman took possession of the originals and ordered some of the most trusted companions to make careful copies.  He then ordered all other unofficial copies to be burned and destroyed.  Five official copies were sent to the greatest cities of the Muslim Caliphate.

The Death of Uthman

The final six years of Uthman’s caliphate were marked by rebellion. Some of the governors that had been appointed during the reign of Uthman were heavy handed and to some extent unjust. In this way, the seeds of rebellions spread and many of the people began to love the luxuries of life that Uthman had warned against. Conspiracies arose and it was difficult for Uthman to distinguish betweenfriends from foe.  He was reluctant to shed the blood of the Muslims,despite they were rebellious.

The rebels called for Uthman to step down and indeed many of the companions advised him to do so.  Uthman was by then an old man of more than 80 years, remembered the words of his prophet and refused to stand down from his position.   Uthman remained true to his caliphate but after a long siege, the rebels broke into his house and murdered him.