The aim of writing this article is to simply raise awareness to Muslims about the Importance of Salah – Prayer in Islam.

This article will comprise three parts which will consist of:

Prayer is the most important pillar of Islam. Indeed it is the dividing line between Islam and infidelity. It is a duty incumbent on every Muslim, male or female, who has attained the age of maturity and has a sound mind. There are numerous verses in the Holy Quran commanding Muslims to observe prayers regularly. The almighty Allah says:

“Verily, the prayer is enjoined on the believers at stated times.” (4/103)

The Messenger of Allah (Peace and Blessing of Allah be Upon Him) constantly reminded the community, of the importance of salah and warned them of the consequences of neglecting it.

Abdullah Ibn Ma’sud (may Allah be pleased with him) narrated:

I asked the Messenger of Allah (PBUH): “Which of the actions is the best?”

In another Hadith, the prophet (PBUH) asked his Companions:

The Prophet (PBUH) said in yet another Hadith:

“The dividing line between a believer and the disbeliever is the negligence of prayer.” (Muslim)

In another report the Messenger of Allah (PBUH) said:

“The first thing about which a person will be asked on the Day of Judgement will be the prayer.”(Abu Dawud and At – Tirmidhi)

When one intends to perform prayer, one has to make sure that the following conditions are fulfilled:

“None of you should observe prayer in a single garment which does not cover his shoulders.” (Bukhari & Muslim)

A woman is required to cover all of her body except the hands and face.

Facing the direction of the Ka’bah in Makkah is the fourth condition for the validity of the prayer.

Cleanliness is of two types:

Both are required for the validity of the prayer. The first. I.e. Ghusl becomes compulsory in the following cases:

Ghusl is performed by washing the private parts and removing the filth from the body, then performing the ritual ablution without washing the feet, then washing the whole body. The feet should be washed at the end.

Ablution is a requisite for prayer. Allah, the Exalted said:

“O you who believe! When you rise up for prayer, wash your faces and your hands up to the elbows, and lightly rub your heads (with wet hands) And wash your feet up to the ankles”. (5/60)

“Allah does not accept prayer without ablution”.

HOW TO PERFORM ABLUTION

If a person is wearing socks, he does not need to take them off for ablution, provided he has put them on while he had ablution. This concession is available for 24 hours for someone who is at home and for three days and nights for a travelling person.

The washing of the parts of body in ablution may be done once, twice or three times but no more than three times. Passing wet hands over the head, inside and outside the ears on the socks is to be done only once.

After completing the ablution say:

End of Part one… 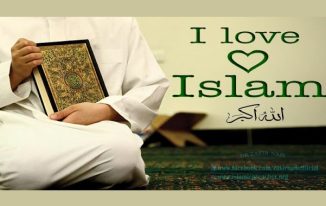